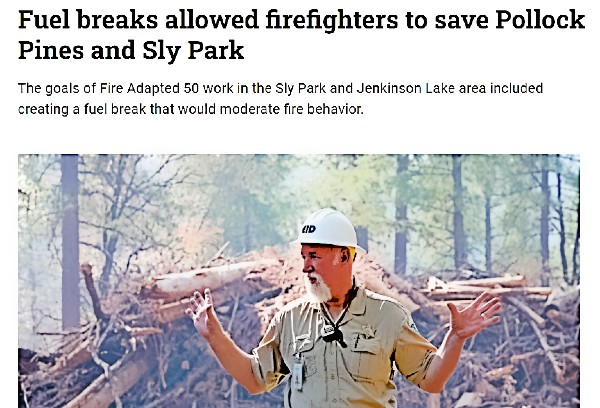 As the Caldor Fire burned toward the Highway 50 corridor near Jenkinson Lake, communities such as Pollock Pines and Sly Park were directly in the …

These project areas offer reasons for hope in a landscape forever changed by the Caldor Fire. And they remind us of the urgency of protecting the thousands of other communities scattered throughout the Sierra Nevada.

The work needed to restore wildfire resilience to the Sierra Nevada may look different across the Region, but the ingredients of effective project design should look familiar. Together, land managers and stakeholders are developing landscape restoration plans informed not just by state and federal goals, but by local expertise, priorities, and values.

On August 14, 2021, the Caldor Fire ignited in a densely forested area of the Central Sierra Nevada. It spread rapidly and, fed by the dry forests, steep terrain, and extreme fire weather of the 2021 fire season, destroyed hundreds of homes and structures as it burned east over the rocky crest of the Sierra Nevada into the Lake Tahoe Basin.

As the Caldor Fire burned toward the Highway 50 corridor near Jenkinson Lake, communities such as Pollock Pines and Sly Park were directly in the fire’s path.

Not a single home or structure in the area was destroyed by the fire.

This is largely because of ambitious, collaborative efforts to design, plan, and implement a landscape-level wildfire resilience project called Fire Adapted 50. The work was spearheaded by the El Dorado and Georgetown Divide Resource Conservation District with state funding support from CAL FIRE and the Sierra Nevada Conservancy. Large local landowners and managers, like the Eldorado National Forest, the El Dorado Irrigation District, and Sierra Pacific Industries, also contributed significant time and resources. Fire Adapted 50 is an example of the effort necessary to create fire-adapted communities throughout the region.

The Fire Adapted 50 project is located adjacent to the southern edge of the King Fire burn area, which burned nearly 100,000 acres in 2014. The never-before-seen behavior of the King Fire and the subsequent prolonged drought increased awareness in the local area about the vulnerability of rural communities and watersheds to wildfires, leading to this collaborative project to restore resilience to the landscape. One of the many goals of the Fire Adapted 50 project was to provide firefighting crews safer locations to effectively work during events, such as the Caldor Fire.

In September 2021, with smoke still rising from the charred landscape, the Sierra Nevada Conservancy (SNC) staff was able to visit completed Fire Adapted 50 projects near Sly Park and Jenkinson Lake. Standing at the edge of a recent treatment area, SNC and partners saw firsthand the impact and effectiveness of work they helped to initiate and fund.

The treatments were effective in protecting local watershed resources, critical infrastructure, and nearby residences. The overall success of Phase 1 of Fire Adapted 50 is a testament to what can be accomplished with close collaboration between federal, state, and local governments toward a common goal.

The goals of Fire Adapted 50 work in the Sly Park and Jenkinson Lake area included creating a fuel break that would moderate fire behavior.

The fuel break provided a safe and effective starting point for firefighters, which was crucial to protecting Pollock Pines and Sly Park from the Caldor Fire.