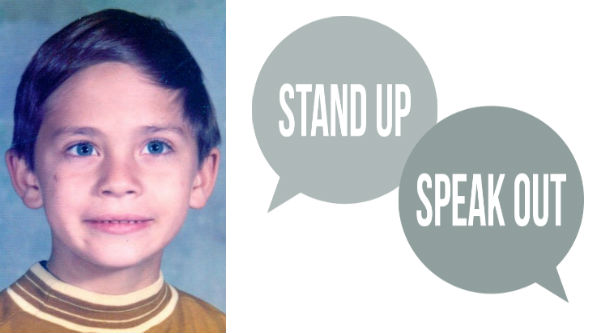 And Why I Refuse to Stay Silent.

When a Bully pushes me, I must push back.  My life depends on it!

It does not matter if I am being bullied by a thug, a powerful elected office holder, or even by the local newspaper, I simply cannot not push back.  Many have asked me why I engage in public fights that don’t directly involve me, and comes with a real cost to me personally.

That is not an easy question, but rather a very painful question to answer.  It requires that I look back at my own formative years to understand how I developed this defense mechanism and why it is so strong in me.

Many will recognize the signs of a “Sick Family” and those that have been bullied, assaulted, neglected, or abused, you will understand the naked honesty of my words and how events early in my life shaped the person I am today, 40+ years later.

I grew up in an environment of domestic violence, sexual abuse of children, and the incarceration of my oldest brother by the California Youth Authority before I started school.  By second grade I had been introduced to sexual intercourse, alcohol, cigarettes, and marijuana.  By third grade my mother had pancreatic cancer and I can still clearly recall the last violent fight that ended that marriage.

Soon my sister was in a Foster home of friends in SLT while my mother, another brother, and I were on our way to Placerville to start again.

I started at Gold Oak in 3rd grade.  I was often picked on for being new in a somewhat insular community.  But it was the bullying by another male family member, that turned into a sexual assault, that most affected my life.

I had learned to trust no one, that no one would protect me except me.  That I had to be independent and self-sufficient.  In 7th grade another very traumatic event happened to me, the details I will omit, but it was another hard event that left me angry, hurt, bitter, and rebellious.  I drank heavily from 8th grade on and rebelled against authority in many ways.

I now understand that this is far too common of a story.  Many reading this know too well the kinds of events, and the feelings I am describing.  I bring up these awful memories from past for a single reason, to give me credibility when I say that no matter how hard things have been, there is hope that things will get better.  Things got better for me when I learned to push back against bullies.

I left my hometown with hate and fear, but found my love in college in SoCal. I found that I could trust again.  We have been a trusting, dedicated couple for over 25 years.  We both had rough childhoods, her’s in south-central LA as an outcast that was beaten as often as she could be caught.  We developed very different coping skills as children, but they complemented each other as adults and we have had a wonderful partnership in life.  One I would not have believe was even possible from what I saw growing up, but I have lived it for almost 30 years so I know it does happen.

In the earliest years of our relationship I brought her back to Placerville to meet my mother and sister.  I had to meet at my sister’s restaurant because my newest stepfather said he would shoot her if she came to the house, because she was black.  At the restaurant a young family member of mine confessed to my wife that the same person that had assaulted me many years earlier, was now assaulting her.  Soon an investigation was started and soon thereafter he was imprisoned.

That was a pivotal moment that changed my life.  I then realized that I had taken my own life back, but by keeping my secret, it allowed my brother to continue to hurt other children.  That is something I cannot forgive myself for allowing.  I know, as an adult in my 50’s, that no child can be held responsible for keeping a secret like that, but knowing this intellectually, is no comfort to me.

I will never keep a secret like that ever again.

Two things are so ingrained in my mental makeup now that they are a subconscious reaction:

Refusing to be Bullied;

Refusing to be Silent.

I have taken that part of my personality and tried to turn into something useful on a greater scale, to help others.  I have positioned myself to have a high profile so that I can provide visibility to issues I care about.  Political, legal, or personal. I will not be bullied and I will not be silent.  I use my position to point out social injustice and to speak for the weak.  Because I was small and scared, and wished someone would speak for me.  So now I am proud to stand for them, even if I never knew them.

My motivation for writing this is that maybe I can help someone.  Why now? The death of popular musician, Chester Bennington of Linkin Park.  When I read that Chester Bennington had apparently taken his own life, I knew I had to make a public response.  I liked some of his songs, and knew him as one of the few men to talk about being sexually assaulted as a child by a man, and how that continued to affect him in his adult life.

I said early on that I gave so many details to earn credibility.  So you know that I get it, I have been to that dark place.  So when I say there is hope, there is wholesome love, there are people you can trust, you can believe it.

If you feel  you are being bullied by a government or regulatory agency, please let me know at cris@inedc.com

If you have done everything you can to resolve the situation and nothing has worked, or someone is in immediate danger, there are ways to get help.

1 thought on “ICYMI – Why I Fight Back Against Bullies”