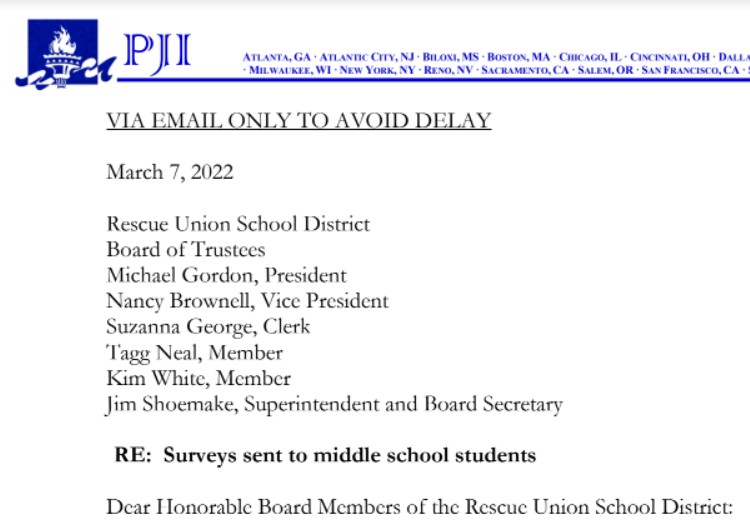 Dear Honorable Board Members of the Rescue Union School District:

Our firm has been contacted by several parents and members of the RUSD community who are gravely concerned about the legality and lack of parental notification that preceded dissemination of a survey to students at Marina Village Middle School. You undoubtedly have been made aware of at least some aspects of this survey, since it has generated substantial controversy. We are writing to ensure that you are apprised of legal issues involved and are taking all appropriate steps to prevent a repeat of this unfortunate incident.

By way of introduction, the Pacific Justice Institute has been advising and representing parents in these types of conflicts, as well as in defense of similar religious and civil rights, for the past 25 years. From our beginnings in Northern California we now have staff attorneys and offices across the United States.

We have reviewed the contents of the survey sent to middle schoolers at MVMS on or about February 18, 2022, as well as general responses sent by school administrators to outraged parents. The parents’ concerns are understandable, as is their dissatisfaction with the vague expressions of regret.

Among other questions, these students—some of whom are preteens and many of whom are not yet sexually active—were asked in a suggestive manner whether they wanted to be regarded as having a variety of sexual orientations and gender identities.

For instance, it was suggested to the young students in this survey that they might be bisexual or pansexual, the latter being an especially loaded term with which many adults remain unfamiliar. The list of suggested pronouns offered to students for self- identification was equally confusing. While it has become less rare in some communities for individuals to identify as the opposite sex, the survey suggested highly inventive terminology and supposed pronouns that would leave most adults bewildered. Among these were supposed pronouns such as e-ex/em, fae/faer, per/pers, ze-zie/hir, and more.

School districts and school personnel in California are not free to introduce sexual topics to children in any manner they wish. The Legislature has long recognized the importance of handling controversial sexual topics with care and ensuring parental involvement. Most recently, the California Healthy Youth Act (CHYA) updated the Education Code in this area while continuing to emphasize parental involvement.

In order to help parents understand their rights, and educational leaders understand their new responsibilities, under the CHYA and pre-existing statutes, our attorneys put together a resource to explain the various statutory provisions in question-and-answer format. We are including it in full following this letter, in hopes it will prevent needless recurrences. A few key portions are especially relevant here.

First, the Legislature still expects parents to be invited and involved in these sensitive discussions—not bypassed or ignored. Education Code Section 51937 reads:

Second, both federal and state law directly address the use of controversial and sex-related surveys. These protections include but extend beyond sex education or LGBT issues. The controlling federal law is 20 U.S.C. Section 1232h. It is too lengthy to reprint here, but it declares that no minor student may be required, absent written parental consent, to participate in a survey, analysis, or evaluation that would reveal
information in any of eight different areas:

The CHYA modified the requirements of Section 51513 by saying that sex-related assessments can be administered to students in grades 7-12. Parents can still opt out, but parental consent may not be required. In this regard, Section 51938 reads:
(c) Notwithstanding Section 51513, anonymous, voluntary, and confidential research and evaluation tools to measure pupils’ health behaviors and risks, including tests, questionnaires, and surveys containing age-appropriate questions about the pupil’s attitudes concerning or practices relating to sex, may be administered to any pupil in grades 7 to 12, inclusive. A parent or guardian has the right to excuse their child from the test, questionnaire, or survey through a passive consent (“opt-out”) process. A school district shall not require active parental consent (“opt-in”) for these tests, questionnaires, or surveys in grades 7 to 12, inclusive.

To the extent that state law may now be less protective than federal law, the CHYA yields to 20 U.S.C. Section 1232h. Violation of this federal law can lead to the loss of federal funding, which would be catastrophic for most school districts.

The survey that sought to bypass parents at MVMS failed these statutes in a number of respects. It violated federal law by probing students’ sex-related attitudes and behaviors without their parents’ consent, and it did not even attempt to comply with state law which permits such surveys only in limited circumstances where they are anonymous, parents are notified, and 6th graders are not involved.

We have reviewed emails from school administrators to parents that sought to allay concerns. These responses, while expressing understanding of the parents’ concerns, do not indicate an understanding of the governing law in this area. References to targeting some students in the future for these types of inquiries, rather than surveying all students, are also not reassuring as parents do not know how their children might be targeted by counselors or other staff with questions about their sexual behaviorsand preferences.

What happened on February 18 created a serious breach of trust which has not yet been repaired. Parents have been left wondering what concrete steps the Board will take to ensure compliance with federal and state law going forward. At a minimum, we recommend the Board consider and adopt a resolution which unambiguously manifests its commitment to the above-quoted statutes.

The Board can—and must—make it abundantly clear to parent, administrators, district personnel, and taxpayers that it takes seriously their concerns and the governing statutes. Vague pledges to avoid a repetition of this particular survey are inadequate to rebuild trust. At a minimum, the Board should reaffirm its commitment—and its firm expectation of all district personnel—to abide by the parental notification statutes. We would also urge the Board to return RUSD to sex

education that is scientific and age appropriate. We would submit that introducing twelve-year-old students to the prospect of pansexuality is not age appropriate, and that suggesting they may want to refer to themselves as fae, per, ze-zie, or a dizzying array of similar nomenclature hardly advances the district’s pedagogical mission. We and the parents of the RUSD community will be closely watching upcoming board meetings to assess your commitment to their interests.