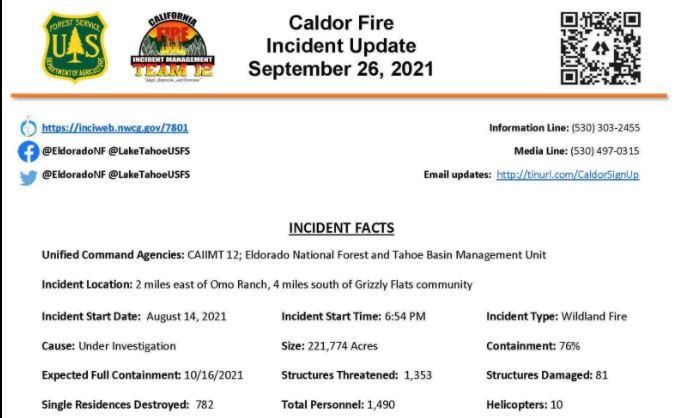 The National Weather Service has declared a Red Flag Warning from 11:59pm Sunday, September 26 to 5:00am Tuesday, September 28. The region is entering a critical fire weather period; fire personnel are prepared to respond accordingly.

Southwest winds will strengthen overnight and tomorrow. By Monday evening, gusts along the ridgetops are expected to peak between 50 to 60 mph. Analysts expect fire behavior to intensify, with increased smoke and burning within the interior of containment lines. In preparation, fire personnel have strengthened and secured contingency lines along high-risk areas. Firefighters are also aware of the risk of spotting, where winds carry hot embers long distances and cause fires outside control lines. Crews are preparing for rapid response to spot fires during the high wind event. Incident command is coordinating with CalFire and local municipal agencies to place additional resources in tactical patrol within the Lake Tahoe Basin and in the Placerville area. Today, crews took advantage of mild weather conditions to mop up along burned areas, secure control and containment lines, and patrol the highway 50 and 88 corridors.

Incident operations supported CalFire and the U.S. Forest Service in suppressing the Rubicon fire, located 14 miles north of Pollock Pines. Crews have stopped forward spread of the Rubicon fire, and will continue initial attack until the fire is fully contained. Primary focus areas continue to be Divisions Quebec, Romeo, and in the Desolation Wilderness between Divisions Ida and Mike. Firefighters are connecting handline in rugged terrain to prevent the fire advancing in those areas.

Caldor fire is still active ahead of the forecasted Red Flag Warning. Residents should remain attentive and alert to fire activity.

• NORTH ECHO — North of Highway 50 between Twin Bridges and Echo Summit, extending to the north just past Upper Echo Lake.

• SOUTH ECHO — South of Highway 50 starting at Camp Sacramento to the top of Echo Summit then proceeding due south to the Alpine County Line.

• HEAVENLY — East of Pioneer Trail between Larch and Al Tahoe, to include the area of Heavenly Ski Resort out to the Alpine County Line and the Nevada State line on the east.

• US 50 SOUTH TO KYBURZ — South of Highway 50 from Ice House Road to Silver Fork Road, to include the community of Kyburz, excluding the area south of the south fork of the American River. East of Mormon Emigrant Trail to Highway 88.

• CHRISTMAS VALLEY — All residences accessed from Highway 89 south of Highway 50 in Meyers through Christmas Valley and including all of South Upper Truckee.