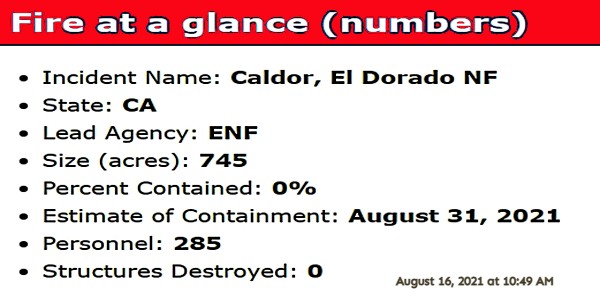 The Caldor Fire is burning in the steep Middle Fork Cosumnes River Canyon east of the Omo Ranch area near Sopiago Creek. Challenging terrain has made accessing the fire difficult. The fire actively burned last night with some growth on all sides but mostly to the east. The new acreage is based on an infrared flight from last night.

Direct attack was used where possible to do so safely and firefighters scouted routes for indirect line construction. Crews were also working on a large spot fire on Big Mountain Ridge. Helicopters and fixed wind aircraft are ordered for today. The nation is at Preparedness level 5 which is the highest level of fire activity and resources are stretched thin.

A Type 3 Sacramento Metro Incident Management Team will be inbriefing today to assist with management and support of the fire.

Weather: The inversion layer over the fire area resulted in reduced fire intensity and spread yesterday. The inversion is expected to lift about mid-day today significantly increasing fire activity. Smoke did not allow air tankers to operate on this fire yesterday. Today’s weather is expected to be hot (about 100 degrees), with low fuel moisture levels and westerly winds. These winds will align with the Middle Fork Cosumnes River canyon resulting in increased fire activity.

Current Situation: Today, firefighters will continue to go direct with suppression efforts where safely possible on all divisions on the fire.

An evacuation center has been established at Diamond Springs Fire Hall.

Immediate Concerns: The communities of Omo Ranch and Leoni Meadows should be on alert and prepared to evacuate.