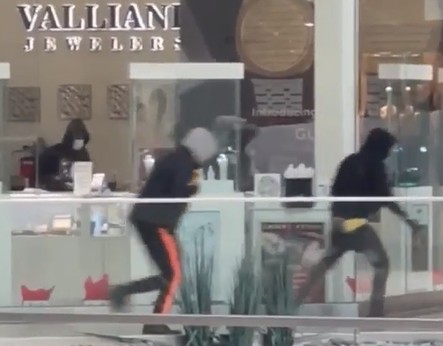 Video obtained by KCRA 3 shows a smash-and-grab theft by several people at a jewelry store inside the Roseville Galleria.

The video shows around 10 people smashing the glass at Valliani Jewelers and reaching in to grab the jewelry before running into the nearby JCPenney.

The Roseville Police Department said one person held a gun while the others destroyed the store’s cases and took the merchandise. All 10 thieves are believed to be between 16 and 22 years old.

Surveillance footage caught the thieves escaping in two cars that were waiting outside the mall, described as a silver four-door Chevrolet and a bright orange Dodge Charger.

The Roseville Galleria said this is the first smash and grab it’s experienced in 2022.